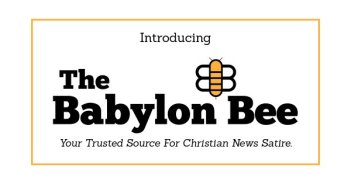 Here’s a sampling of the latest faux headlines:

The Bee is the creation of 32-year-old Adam Ford, a dad from Detroit. According to The Washington Post—yeah, that’s right, The Washington Post did a story on this (here)—Ford launched the Bee in March, and it attracted more than 1 million visitors(!) within three weeks. Not bad. The stories are provided by unpaid freelancers (acceptable translation of the Greek phrase “Seminary Students”).

Prior to launching the site, Ford hoped to be a pastor. Then debilitating panic attacks and clinical depression caused him to turn away from crowds and toward writing. He found his niche:

“Most of the articles serve to hold up the truth and let it do the work,” he states. “I hope people leave the site with a spring in their step, or limping.” (Washington Post)

Both possibilities present themselves.

Take, for instance, the recent story about the time Joel Osteen’s happy thoughts made him able to fly (here).

“I just decided one day I wasn’t going to let the enemy hold me back anymore, and I started boldly declaring before God each and every day that I was going to fly.”

The report ends with the smiley televangelist soaring high above the one-time NBA arena where his church meets.

And then there is the bulletin about a “Wild at Heart” Men’s Group that got hopelessly lost in a lightly wooded field behind their local church:

“Medics were immediately called to the scene to treat the brave, but traumatized, group of men.”

“After all this, [one member] says he’s not giving up on the Wild At Heart study. ‘There’s something primal, risky, and wild in God’s heart. While we may have come uncomfortably close to death in this harrowing experience, we’re that much closer to finding out what it means to be a real man of God.’”

I find these stories hilarious.

And perhaps that’s unsurprising.  I have been a longtime fan of Stephen Colbert, Jon Stewart, and John Oliver.

But here’s a serious question: Can satire be a sanctifying agent for the church?

In other words, can it serve a purpose other than just making us smile? Or is it more likely to be detrimental as Christians make fun of each other, or the church at large?

As someone who loves satire, I must admit that it has pitfalls.

For some of us, cynicism lurks behind the laughs.

Such cynicism is negativity with a smirk. It is a pervasive pessimism marked by punch-lines rather than overt anger. If you’re really angry, you can slap a Trump sticker on your car and fantasize about a giant golden wall in ways that make even characters on the Walking Dead feel uncomfortable.

But if you’re prone to cynicism, perhaps you turn on John Oliver’s Last Week Tonight.

Personally, I’m predisposed to the latter more than the former. But neither is good.

I’ve noticed this danger as I enjoy offerings like The Daily Show, and comedians like Jon Stewart. At their best, they shine the light of truth through humor, but for some of us (read: me), too much satire can reinforce the sense that everyone in politics and media is either a hypocrite, a moron, or both.

For me, cynicism is something I must guard against.

A second danger in satire is a kind of self-righteous meanness (or at least pride) that emerges as we tear down others in the name of comedy .

Sometimes this is done by those who have few accomplishments of their own, as highlighted in this story from the Bee: “First-Year Seminarian Ready To Take Over For Senior Pastor If Necessary.”

Gesturing to his pack of Greek flashcards, Turner added, “And I suppose it’s time to talk to him about that Bible translation we’re using. Ugh.”

Out on a hospital visit, Rev. Price was unavailable for comment.

If you have ears to hear, then hear.

In sum, there are pitfalls to reveling in too much satire or cultural critique. But as I will argue now, I hardly see such dangers as damning to all satire.

Personally, few (if any) Babylon Bee stories strike me as either mean-spirited or cynical.

They’re funny. And in most cases, there appears to be a light-hearted twinkle in the author’s unseen eye.

As contributor Michael Coughlin remarks in the story from the Washington Post:

“You can be satirical without being cruel.”

And as Jon Acuff states:

“Sometimes the best satire is tempered by love.”

As Walter Kaiser, one of my old Seminary Profs, once said: Humor can help the message go down, like a parent who makes faces at a child in a high chair as a way of getting them to smile, open their mouth, and insert the food or medicine.

Along these lines, Terry Lindvall, author of God Mocks: A History of Religious Satire from the Hebrew Prophets to Stephen Colbert, claims that satirists often act like prophets, helping believers see where they’ve gone astray.

This is true.  But I also think that “speaking prophetically” can be a euphemism–at least as I have used it–for “being a self-righteous jerk.”

Real prophets are more likely to be sawn in two than retweeted.

So what’s the big idea?

By my judgment, satire cannot sanctify us. Only God can. And he does it by his word and Spirit.

Yet perhaps God sometimes uses well-placed satire as a way of opening our eyes to realities that need attention. Or perhaps he uses it to keep us from taking ourselves too seriously. As Martin Luther liked to say:

“Mock the devil, and he will flee from you.”

There are dangers, of course, like cynicism and self-righteous meanness. But in my view, such problems need not be inherent.

So now for the important question:

5 thoughts on “Can Satire Sanctify? The Babylon Bee takes the Internet by Storm”