“When you’re a star, they let you do it. You can do anything.”

And while Donald Trump said this of women, it’s been more true of his relationship with the Religious Right.

In short, Donald Trump has treated the bride of Christ just like the other married women in that disgusting audio recording. Yet unlike more honorable brides, some evangelical leaders have done nothing to resist his self-serving advances.

This, indeed, is a profound mystery. But I am talking about Trump and the church. 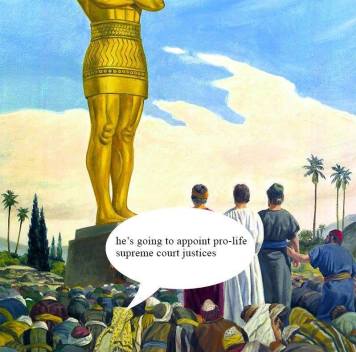 To be honest, I thought I’d written my last post on this subject.

Then came the audio of Trump bragging about his sexual assaults. And yes, that is the proper word for it (You just “Grab them by the p—y; you can do anything!”).

So here we are. Once more unto the breach.

In past posts (for newcomers):

Along slightly different lines, I also appreciated my pastor’s wise advice to think for yourself, to think biblically, and to vote accordingly.

As many of my Christian friends more-or-less concede, Donald Trump is a lecherous braggart with no serious proposals, the temperament of a toddler, and a penchant for racism and misogyny.

But… they say… We still must vote for him, because if we don’t, we’ll lose our religious liberties. And that “trumps” everything.

I respect people who say this.

And indeed, one of the things I like about academics is that we often disagree (even in print), not because we dislike one another, but because critique brings clarity, and that helps us all.

In fact, amongst esteemed professors, the way you honor someone is to gather their friends from around the globe, and publically critique their work. 🙂

And while that may seem strange, there is something beautiful about it too, because it says that even severe disagreement need not sever friendship.

(Now back to the issue.)

THE GRAIN OF TRUTH

As best I can tell, the logic of the “religious liberty” argument runs as follows:

Christianity is under attack. And if we don’t elect this admittedly horrible person, we will face further marginalization in the future.

(Note: I toned down the prior sentence in the editing process. Originally, it read: “orange-tinted sexual predator,” but I will not say that. Many others are saying it. I will not.)

And to be honest, there are bits of the religious liberty narrative to which I’m somewhat sympathetic.

It concerns me that our culture has confused “tolerance” with “agreement” (see here). And there are some areas in which liberty has been eroded.

The problem, however, is not just that the threat is sometimes exaggerated.

The deeper issue is the assumption that Christians should publicly join themselves with truly horrible individuals (and ideas) in exchange for promised “favors.”

And my fear, which is rapidly materializing, is that American evangelicalism will suffer permanent damage for its shameful part in Trump’s doomed and degenerate campaign.

Here are just a few:

That is not the kingdom of God.

But it is in danger of becoming “American evangelicalism.”

So what’s my personal answer to the religious liberty argument?

As a Christian, and a father of two girls, I would rather lose every shred of my religious freedom than align myself with this truly vile human being.

In fact, I would rather have Christianity assailed from without (by liberalism) than corrupted from within.

As history shows, we can survive being marginalized. We can even survive persecution (though the “p-word” is sometimes overused by the Religious Right).

But we cannot so easily survive brazen complicity with the worst elements of human behavior. Nor do we deserve to.

So, yes, I still care deeply about abortion, the supreme court, religious liberty, and everything else.

But as Christ’s bride, I will not be treated like that married woman who Trump took “furniture shopping” in an effort to buy her body.

I did try and f— her. She was married. And I moved on her very heavily.

Some things are more important than “furniture.”

And some things are more important than political favors.

That’s my opinion, and I’m sticking to it.

Now a brief addition to the original post to address a common critique:

I should probably clarify at this point, what I am NOT saying.  I am not saying (as some seem to think) that we, as Christians should simply “give away” our liberties or treat them lightly (Thus, the intentional use of the word “lose” instead of “give” in my admittedly hyperbolic title).

Since true liberties are given by God, they should not be encroached upon by anyone.  Period.  Nor should they be “given up” without right resistance. I’m not proposing that we stop caring about religious liberty–in fact, I explicitly state that I do care about it, and that there are areas of concern.

What I am saying is that the church should stay true to Christ and his values (which, for me, means saying “No” to both candidates). And if that means having to face further marginalization in the future, then we must face that also by staying true to Christ.

Nothing is gained by linking arms with a truly destructive and dangerous candidate simply because he promises certain favors to one particular group. In sum, I do not think this is a particularly controversial idea and there is ample precedent for it in the Scriptures.

joshuamcnall Joshua McNall (PhD, Manchester) is Associate Professor of Pastoral Theology and Ambassador of Church Relations at Oklahoma Wesleyan University. In his free time, he enjoys golf, doing CrossFit with friends, and spending time with his wife, Brianna, and their four kids (Lucy, Penelope, Ewan, and Theodore).
Published October 10, 2016March 23, 2017