“Make America read again” might be my catchphrase for this year.

Along those lines, I recently saw a video in which N.T. Wright was asked to share three books that changed his life.

And that got me thinking about what those three books would be for me.

The Bible is too obvious. So I’ve chosen texts from three completely different genres. They’re not necessarily my favorite books, but they did change me in some way.

Here they are in no particular order: 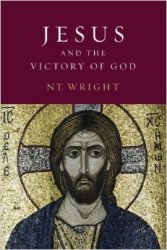 I read Wright’s 741 page monstrosity on Jesus was I was just starting grad school.

It made me want to be a scholar.

I had never encountered a deeply academic work that was so enjoyable to read. No scholar in recent memory has been able to meld the academic, the accessible, and the aesthetic like Wright.

Likewise, one rarely encounters a work that is so orthodox and so innovative at the same time. It showed me that constructive and creative work need not be heterodox.

Wright set forth ideas on Judaism, parables, ancient politics, and Christ’s prophetic identity that I had never heard before. And while I’ve come to disagree with him on certain things, the book provided a preeminent example of what good scholarship should be: deep, readable, faithful, provocative—and never boring.

I was always terrible at math and science.

In fact, I once joked (sarcastically) that I earned a PhD on the Trinity because it was the one discipline in which you could say “3=1” and get away with it.

And while I’m still bad at math, I’ve grown more interested in science.

One reason is that evangelical Christians have sometimes had such an adversarial relationship with the discipline. And this is sad. We need good science. We don’t need pseudo-science. And we badly need to stop treating scientists as if they are enemies.

All facts are friendly if you’re interested in truth.

Along these lines, Diamond offers fascinating scientific explanations for why western European nations ended up with guns, germs, and steel while other cultures (for instance in Africa and the Americas) did not.

Why did western Europeans conquer the Incas and not vice versa?

His thesis is a rejection of older racist theories, and a detailed look at how our environments shape us.

I’ve reread no novel as I have this one.

It might be my favorite work of fiction. And oddly, it is one of Lewis’ least known books. “I’ve never read that one,” people always tell me.

The story is a reworking of the ancient myth of Cupid and Psyche, but (as usual) Lewis paints new meaning into a tale that examines beauty, jealously, self-deception, and blood sacrifice.

“I saw well why the gods do not speak to us openly, nor let us answer. Till that word can be dug out of us, why should they hear the babble that we think we mean? How can they meet us face to face till we have faces?”

As evidence of how great my wife is, she even bought me a first edition a few years back, complete with a sweet pic on the back cover of Lewis smoking his pipe. 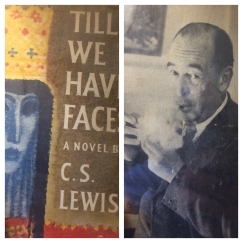 Now the big question: What three books have deeply influenced you?