Minimalism and the Sermon on the Mount

“You can never get enough of what you don’t really want.”

That was the line that zinged me from the documentary entitled Minimalism (available on Netflix). 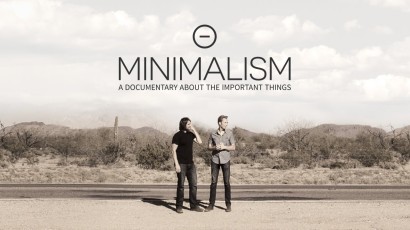 For those not familiar:

Minimalism is a lifestyle that helps people question what things add value to their lives. By clearing the clutter from life’s path, we can all make room for the most important aspects of life: health, relationships, passion, growth, and contribution.

The documentary introduces a wide variety of people, who, despite great “success” in the corporate world, grew dissatisfied with their lives of compulsive consumption.

“We’ve been told that more stuff will make us happy,” they all say, “but that wasn’t the case for me.”

The solution was to shrink their human footprint (often radically), in order to find more time, more money, more freedom, and more meaning.

It worked, allegedly, and each one proudly preached the gospel of minimalism with the zeal of a hemp-shoed televangelist.

JUST ANOTHER FORM OF EXCESS?

From my perspective, there’s much to love about the movement.

Yet I was also struck (occasionally) with the sense that, for some, “minimalism” seemed like just another species of excess and one-upsmanship.

Instead of merely downsizing the McMansion, “true believers” were shown luxuriating in their Derek Zoolander-inspired center-for-ants-sized “tiny homes” (which often retail for more than my last actual house), and gushing about how their lives are so much better now that they have one pair of pants.

“I woke up really SAD one day… And then I realized, it was that second pair of slacks.” ~Fake quote.

This is, of course, an exaggeration—and Joshua and Ryan (“The Minimalists”) are quite keen on tempering such impressions.  Minimalism will mean different things to different people. And as they say, it’s not about what you get rid of, it’s about “Everything that Remains” (see here).

Perhaps, then, the extremes are just more interesting to us.

After all, no one watches an A&E show called “Not really a Hoarder, but still kind-of lazy with regard to housework.” No. We want the hardcore stashers—boring mole-like mineshafts through discarded USA Todays.

And so too with the minimalist who makes toothpaste pull triple duty as hair product and underarm deodorant.

Minty fresh, from nave to chops.

So whether it’s the meta comparison of “Who’s got the bigger boat?” or the micro one-upsmanship of “I live in a van down by the river (for the planet!)”—both poles can represent the same pathology.

But having said all this….

Much of the minimalist mojo fits quite well with Jesus, and especially with his Sermon on the Mount.

“Watch out!” Christ said: “Be on your guard against all kinds of greed; life does not consist in an abundance of possessions” (Lk. 12.15). In fact:

23 life is more than food, and the body more than clothes.

24 Consider the ravens: They do not sow or reap, they have no storeroom or barn; yet God feeds them. And how much more valuable you are than birds! …

27 “Consider how the wild flowers grow. They do not labor or spin. Yet I tell you, not even Solomon in all his splendor was dressed like one of these. 28 If that is how God clothes the grass of the field, which is here today, and tomorrow is thrown into the fire, how much more will he clothe you—you of little faith! 29 And do not set your heart on what you will eat or drink; do not worry about it. 30 For the pagan world runs after all such things, and your Father knows that you need them. 31 But seek his kingdom, and these things will be given to you as well

32 “Do not be afraid, little flock, for your Father has been pleased to give you the kingdom. 33 Sell your possessions and give to the poor. Provide purses for yourselves that will not wear out, a treasure in heaven that will never fail, where no thief comes near and no moth destroys. 34 For where your treasure is, there your heart will be also (Lk. 12).

So while I will be keeping that second pair of pants, and forgoing the $400 per-square-foot tiny house, I do recommend the documentary for those of us trying to whittle down our excess in service of the Kingdom, and in pursuit of peace.

After all, as Jesus taught the woman at the well (Jn. 4):

You can never get enough of what won’t really satisfy you.

joshuamcnall Joshua McNall (PhD, Manchester) is Associate Professor of Pastoral Theology and Ambassador of Church Relations at Oklahoma Wesleyan University. In his free time, he enjoys golf, doing CrossFit with friends, and spending time with his wife, Brianna, and their four kids (Lucy, Penelope, Ewan, and Theodore).
Published July 11, 2017