The silence of our friends

And while that means many things, one practical result is that today, of all days, we are more likely to see a plethora of King quotations sprinkled through our Facebook news feeds–if only to show friends that “I” am not a racist jerk.

There are many excellent MLK quotations; yet this is the one that I’ve been pondering:

“In the end, we will remember not the words of our enemies but the silence of our friends.” (The Trumpet of Conscience, Steeler Lecture, 1967)

The statement dovetails with an insight from King’s “Letter from a Birmingham Jail,” where he spoke of what he called the “white moderate.”

There he admitted that

I have almost reached the regrettable conclusion that the Negro’s great stumbling block in his stride toward freedom is not the White Citizen’s Counciler or the Ku Klux Klanner, but the white moderate, who is more devoted to “order” than to justice; who prefers a negative peace which is the absence of tension to a positive peace which is the presence of justice […]

In other words: The taunts of enemies are less crushing than the silence of “friends.”

Which brings me to me.

A MESSAGE FOR THE SILENT

On what injustices am I tempted to be silent over?

How am I prone to be like that “white moderate” described by King, who was, in fact, a greater stumbling block to justice than the KKK?

1. The resurgent racism of our MAGA moment

One area that I am sorely tempted to be silent over has to do with the rise in nationalism (and sometimes outright racism) that has accompanied our current MAGA moment.

By any metric, certain segments of America have been made more of a “safe space” for white nationalism, as evidenced by a sitting congressman who recently implied that terms like “White supremacist” and “White nationalist” should not be seen as offensive. (Along with a litany of lesser, though related, statements.)

Then, we watched in shocked sadness as an aging Native American man (who was also Vietnam vet) was jeered by a crowd of “Pro-Life” high schoolers as he chanted a peace song during an indigenous peoples march in Washington, D.C.

“Build the wall!” they shouted in his face.

[*See below for update] 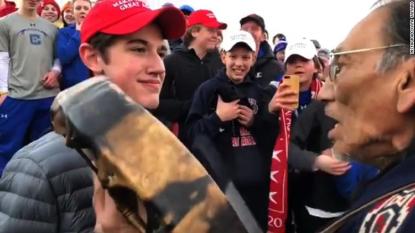 For the past week, I’ve said nothing about either. Why?

2. The un-cool connotations of the Pro-Life cause.

My second temptation (like that of Christ) is related to the first.

After all, those ignorant teenagers (a redundancy we should all remember before permanently crucifying them) in MAGA hats were in Washington for the “March for Life.” This is an annual event designed to raise awareness over the atrocity of legally slaughtered babies in America.

It takes place near the anniversary of Roe v. Wade.

And I said nothing about that either.

I’m busy. Obviously. But another reason is that the same crowd that praises me for writing occasionally about the resurgent racism of our MAGA moment, often doesn’t think it cool when I talk about the evil of abortion.

And when you’ve already alienated one pre-fab fan-base, the temptation is to keep the other group happy.

Based on our current (nonsensical) partisan arrangement, we are told that we cannot speak out about both problems (#1 and #2).  We must either choose everything from “column A” or everything from “column B.” And if you refuse to bundle your issues in a way that fits the Cable News silos, you will face hostility from both sides.

3. The stuff that doesn’t qualify as “news”

A third and final area on which I’ve been too silent involves that enormous, cloud-covered mountain of important stuff that doesn’t fit the category of “shiny objects” in our news feeds.

If a tree falls in the forest and it has nothing to do with Trump or Kanye or the NFL playoffs, does it make a sound?  Not usually.

A friend was telling me this morning about the horrendous surge in persecution toward Christians in the world’s two largest countries: China and India. I’ve known about the former, but have I even prayed about it, much less write a blog post?

There aren’t many “cool points” there.

“The root cause of this persecution,” he said, “is actually the same thing we’re seeing all over the world. The rise of nationalism.” It’s an anger towards “outsiders” in an effort to make China more Chinese again; or India more Hindu.

The result is a metaphorical mob of chanting nationalists, surrounding Chinese Christians, as they sing their peace songs.

Will anyone say anthing?

Of course, it isn’t possible to speak up on every issue. The world is too big. And “outrage fatigue” is a real thing.

In addition, speaking up is no guarantee of speaking well, since some self-styled “prophets” are just demagogues in church clothes (see here on trying to sort out the difference).

Nevertheless, these are the words that I am pondering today, spoken to me if no one else:

“In the end, we will remember not the words of our enemies but the silence of our friends.”

Update: After posting this story, new videos and firsthand accounts surfaced that call into question the earlier reports regarding the MAGA high school students in D.C. See here . If these reports are accurate, then it appears that these students are owed an apology from myself and many others.

Feeling baffled by the Bible? Check out my new book, Long Story Short: the Bible in Six Simple movements(here).

Signup here to receive bonus content through my email Newsletter (“Serpents and Doves”).

I will not clog your inbox, and I will not share your email address.

joshuamcnall Joshua McNall (PhD, Manchester) is Associate Professor of Pastoral Theology and Ambassador of Church Relations at Oklahoma Wesleyan University. In his free time, he enjoys golf, doing CrossFit with friends, and spending time with his wife, Brianna, and their four kids (Lucy, Penelope, Ewan, and Theodore).
Published January 20, 2019January 22, 2019