On Catholic Crosses, Welcoming a Son, and “Being Gangsta”

When I was five or six, I remember being allowed to visit the local Dollar General Store to spend “my very own money” on whatever I liked.

I selected a massive golden crucifix on a gaudy golden chain.

Upon showing the purchase to my parents, I was informed that I had made a slight mistake. This was a “Catholic” cross, as evidenced by the gold-plated Jesus hanging from it.

While we were cool with the Catholics, I was told that “Our crosses are empty.”

The point, for Protestants, is that Jesus is no longer on the cross—he’s risen—so we prefer our sacred death-devices to be unoccupied. Or for my Spanish readers: desocupado.

Fast-forward thirty years and I sit now inside a Catholic hospital where I will also be allowed to spend some of my “very own money”—but it’s been worth every penny.

And right above my head, as I now type, there is another Catholic crucifix.

And somehow it seems fitting.

Yesterday, when Teddy was born, he was having some trouble breathing. While the doctors weren’t too worried, his respiration was far more rapid (that’s: rapido) than desirable. And to make matters worse, he could not go to Brianna’s room to in such a state.

So there I sat in the nursery—stripped to the waist so he could feel my skin—singing “Hush little baby” in front of a plate-glass window through which onlookers watched a topless professor who probably looked like a pasty primate trying to “nurse” a baby (*despite some gender confusion).

Thankfully, Teddy is fine – but as I sit now under a suspended Christ, I am thankful for the Catholic crucifix. It is not necessarily better than its more triumphant counterpart, and in some ways it may occasionally be prone to fetished misconstrual.

But in some settings—like the hospital—it also seems more helpful.

By it I was vividly reminded that mine was not the only Son to struggle for breath in a world that is harsh and cruel compared to that from whence he came. And unlike mine, this other Son could not feel his Father’s presence, much less his skin.

Eloi, Eloi…, he screamed, and was not comforted.

Rewind five hundred years and a man named Matthias Grünewald sits painting an altarpiece for a monastery that doubled as a hospital.

The location, Isenheim, in France, had been afflicted by a terrible plague that manifested in festering sores upon the skin. 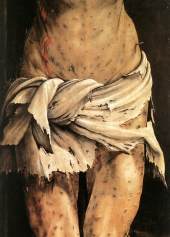 Famously, Grünewald infected Christ. He chose to paint the sores upon the Savior.

The message was clear. As the Book of Hebrews states: We do not have a High Priest [Jesus] who is unable to sympathize with our travails (Heb. 4.15). He knows. He’s been there.

He knows what it’s like to gasp for breath, to have a prayer go unanswered, to feel betrayed by friends, belittled by cynics, and beaten up by bullies. He was murdered naked in front of his own mother. And while the good news is that the cross is no longer ocupado, sometimes it helps to see—yes, actually see—the Catholic version.

Because while language is a gift, some images transcend translation.

joshuamcnall Joshua McNall (PhD, Manchester) is Associate Professor of Pastoral Theology and Ambassador of Church Relations at Oklahoma Wesleyan University. In his free time, he enjoys golf, doing CrossFit with friends, and spending time with his wife, Brianna, and their four kids (Lucy, Penelope, Ewan, and Theodore).
Published April 27, 2017April 27, 2017

One thought on ““Ocupado””